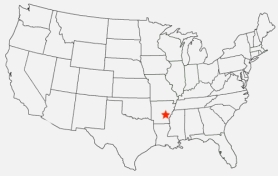 This is a guest post from writer Samuel Autman who contributed in response to the American Vignette call for submissions. The setting is Arkansas. Enjoy.

I am standing outside of my grandparents’ house in Grady, Arkansas, a town of 523 souls on the Mississippi Delta. My sister and I spent our summers running around barefoot on these red dirt roads as children. Our grandmother sometimes locked us kids out of the house as she sat at a sewing machine eating ice cream with an electric fan blowing on her.

“Chillun belongs outside,” she’d yell to us as we had our faces pressed against the screen door.

Clouds dance on the pink horizon as the sun sets over the green and white wooden house my grandfather built in 1960. I’m five hours late having flown from New York City. I haven’t stayed the night at their house in twenty-five years. I’ve come to see Madea, 87, and Granddaddy, 90, before one or both of them dies. I want her to hug me, give me a hot tea and wrap me in one of her homemade quilts. Just maybe age has softened her.

I slam the rental car trunk shut, compose myself and knock on the door.

They yell for me to come in.

Madea rests on her recliner while Granddaddy sprawls out on the sofa. The audience cheers on The Wheel of Fortune. I stoop my 6-foot-4 frame to hug them each. Vanna White turns a consonant around. The woman on the TV picks the wrong word.

Granddaddy sits back and radiates in silence.

“Now boy how’s comes you is so late?” Madea spits out, clutching the TV remote.

“Oh, I overslept and missed my flight. I had to take a later one.”

I smile at Madea. Her once bovine frame bent over with what my mother called an “old folks hump,” the deformity so pronounced she needs a walker to prop herself up. Moles, the sizes of raisins and chocolate chips, populate her face. Those same moles had begun appearing on my mother’s skin. The eyeglasses sit cockeyed on her face. She looks like a little girl.

Madea reaches down and spits in an old torn up Clorox Bleach bottle crammed with paper towels stained with brown spittle.

I grimace and swallow before mumbling, “Yes ma’am.”

“Well, I’m just not with anyone right now.”

Madea knows that a 40-year-old man who has never mentioned women nor brought home a girlfriend wasn’t into women. The things I want to say, I can’t. My mother would never forgive me. I force a smile. My grandmother will never change. I’m still the kid with his face against the window looking inside.

My grandparents have lived in Lincoln County all of their lives. Cotton gins and John Deere tractors litter the landscape. Sunflowers, hogweeds, and dandelions grow a plenty. Cotton, rice and soybean fields claim more than three-quarters of Grady’s land, an atmosphere where rats and snakes thrive. The swampy summers are filled with lots of thunderstorms and flash floods. Even after the many years of slavery and sharecropping had ended, whites still own most of the big farms.

In Arkansas, just like in Mississippi, Missouri and Louisiana, the life of the state once depended on the industry that came floating along rivers, except that no major rivers flow through Grady.

There are two bayous nearby, Deep Bayou, a small water hole where people still get baptized by full immersion, and the Bayou Bartholomew, which is the biggest bayou in the United States. It flows from northwest Pine Bluff on for 359 miles south crossing the Louisiana Border connecting to Ouachita River. But when Madea talks about “the bayou,” she means the Bayou Bartholomew because of its size. And more folks drowned in that one.

As the crow flies, Grady is 22 miles south and east of Pine Bluff in the middle of Lincoln County. From U.S. 65 highway it once was a clean shot. Around 2009 the federal government extended Interstate 530, effectively cutting Grady off from any traffic now. All the stores, even the gas station closed. Grady hovers at death’s ridge but won’t cross over.

Most of my cousins that we ran round with as kids have moved away.

A few months before Madea turned 94 a stroke forced her to move in with relatives in Little Rock.

The Grady I knew has become a memory.

Samuel Autman teaches writing at DePauw University in Greencastle, Indiana. His essay “A Dash of Pepper in the Snow” appears in The Chalk Circle: Prizewinning Intercultural Essays anthology and ​was nominated for a Pushcart Prize in 2012. His essays have appeared in Under the Gum Tree, Brevity: A Journal of Concise Literary Nonfiction, Postcard Memoirs, I’m Black and I Travel, The Huffington Post and The Good Men Project. He is currently working on Sanctified: A Memoir, an excerpt from which has been turned into a short film called “A Long Walk.”

What are your thoughts? Cancel reply

Andrea Badgley is a mom, wife, and creative nonfiction writer at Butterfly Mind. She grew up on the coast of Georgia and now lives with her husband and two children in the Appalachian mountains of Virginia.