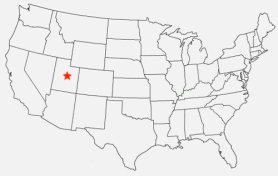 This is a guest post by Robert Robinson who contributed in response to the American Vignette call for submissions. The setting is Utah.

Henri Nouwin wrote, “Solitude is the furnace in which transformation takes place.” It is only during extended periods of solitude that your demons reveal themselves, become known to you, and you name them — as you would a child. In the furnace the soul is hammered, tempered, and forged. But it is the loneliness of solitude that people fear most, making many tragic mistakes in its avoidance; however, it is through solitude that you learn to enjoy your own company and become comfortable with yourself, in spite of yourself.

For me, solitude is the natural order of things. I live alone except for my dog Touch, and although we have our conversations, they tend to be one-sided. Before I got Touch, I would go for months never speaking a word. I once startled myself with the sound of my own voice. I had been doing dishes and had decided to make myself a sandwich. I was spreading mayo onto a slice of bread when it flipped out of my hand and landed in the dishwater. I said, “Damn”, with great conviction, and it startled me as if somebody else had shouted in my ear. Now I talk to Touch daily, which keeps my vocal-cords from becoming petrified.

Fishing, especially fly-fishing, is a solitary pursuit. The mechanics of fly-fishing and the distance required between the fishermen preclude conversation. When one of my friends goes fishing with me I thoroughly enjoy the company and good conversation, but most of my fishing buddies are family men, and they go fishing in search of solitude and a break from the hassles of family life. Even when we make efforts to fish together, the conversations erode into shouting back and forth across the stream until we tire of trying to communicate and wander off to fish alone.

Antoni Gaudi, the architect of the Basilica Sagrada Familia in Barcelona Catalonia Spain, wanted the interior of the church to have the feel of a forest. He thought that man can feel closest to God in a forest and I think that is true. The facade of the Basilica reminds me of the small groves of pines that form where the pine forest gives way to the Aspens just below the timberline. When I see them, it’s easy to understand how the Druids came to worship trees, or why we think of Heaven as being above.

Living in the inter mountain west, wilderness and the solitude it offers is only a thirty-minute drive in any direction, yet, I have met people who have lived here all their lives having never been to the mountains. My trips into the mountains are not initiated by any desire to be spiritual, but by a desire to go fishing; however, once I’m there, surrounded by the beauty of the mountains, I feel insignificant. I think of the thousands of years it took to form the mountains, the thousands of years they have stood, and the thousands of years they will stand after I am long gone. I begin to think of my mortality and the door of spiritual awareness swings open. I no longer fear going through. I have shook hands with the demons, stared into their ugly faces, and took responsibility for them. I learned that I’m not such a bad guy in spite of them and consider myself a friend. The question is not whether to go through the door, but whether the Trout will take a dry-fly.

I have fishing buddies who seem to have an investment in my solitary life style—they tell me I’m their hero. They think that my solitary existence is some heroic statement against the establishment and not the end result of some piss-poor choices coupled with a desire to insulate myself from what had become a vicious cycle of pain and rejection. They don’t realize that after twenty years, the benefits of a solitary lifestyle were long ago reaped. So when I told them that an old girlfriend from high school was coming for a visit, they shouted in unison, “You’re screwed!” They walked off slowly shaking their heads—presumably to don sackcloth and sprinkle ashes on freshly shaved heads—and went home to their wives.

I don’t have the gift of prophesy that my friends apparently have, so I don’t know if my solitary existence is coming to an end. Perhaps my solitude will be snatched in bits and pieces now, but I know where to go to find it.

There’s a small creek that runs through a narrow valley surrounded by green mountains. Nobody fishes it because the fish are small, but they are the most brilliantly colored Trout I have ever seen, which tells me it’s a special place, a place of healing. It’s a place I would take a friend, a friend who had a broken heart.

Robert Robinson lives in Utah with his dog, Touch, and writes outdoor stories and some memoir pieces. He has been published in A. R. Harding Publishing’s Fur-Fish-Game magazine and is soon to be published in Game & Fish magazine. His work can be seen at Fly Fishing The High Country and as UtahRob on Tumblr. Robinson is a Vietnam era veteran, fisherman, writer, and role model for today’s troubled youth.

What are your thoughts? Cancel reply

Andrea Badgley is a mom, wife, and creative nonfiction writer at Butterfly Mind. She grew up on the coast of Georgia and now lives with her husband and two children in the Appalachian mountains of Virginia.
Join 5,710 other followers