Have you ever listened to a song and thought, I want to read a book that feels like this song? Dar Williams’ Iowa is one of those songs for me. It’s lovely, and lonely, and it’s what I think of when I think of the state of Iowa.

I’ve never been to Iowa, so I’m not sure how accurately her song represents a sense of the state, but it did make me eager to read books set there. My first attempt, Gilead, let me down in giving me the feeling that Williams’ songs gives. But the second on my Iowa journey, Jane Smiley’s A Thousand Acres, did not disappoint.

Set on a thousand acres of land, transformed by three generations from swamp to thriving family farm, A Thousand Acres begins when the current patriarch, Larry, decides to retire and give the land to two of his three daughters to avoid inheritance taxes on their behalf.

Only Larry wasn’t ready to retire. Not really. As his daughters and their husbands farm the land, in the way he taught them, he stares from his living room window, buying needless fancy furniture to one-up his neighbor’s expensive new tractor, and suddenly their entire lives unravel.

A Thousand Acres is the dark underbelly of the family farm life, of keeping up appearances, of family secrets, learned coping mechanisms, the nuances of truth, honesty, protection, and values, and a hint at the underlying causes of miscarriages and madness in the race for family farms to keep up with corporate farming.

Behind all of this is the backdrop of fertile Iowa: of land that yields corn, beans, tomatoes, prairie grasses, pink sunsets, and black starry skies.

The land and landscape — the farmhouses, the crops, the road that joins the family houses, the sounds of insects and equipment, the scents of farmers ad tomato vines — all of this is as much a part of the novel as the people are, and every bit of it gripped me.

This book shows through detail and marvellous story-telling of how we perceive each other, respond, manipulate, remember, and forget, and how all of these behaviors and perceptions mold our worlds, sometimes with tragic consequences.

I found out after reading Smiley’s novel that it is a modern adaptation of Shakespeare’s King Lear, a drama in which keeping up appearances, hierarchies, conflict between generations, and madness play major roles. Smiley’s work stands alone with these themes, though — I needed no knowledge of King Lear to feel her novel’s power. It is a beauty of a book.

Endora. A small town in Iowa in which Gilbert Grape, son of a suicide father and a morbidly obese mother, and brother to a motley crew of siblings, is the only one in a 1,091-person town who is resistant to the forward march of the progress and modernization that are the Food World national grocery chain and the fast food franchise, Burger Barn.

Gilbert has become the default “man” of the family after his eldest brother, Larry, found their dad swinging from a rafter in the basement of their house. Larry left town as soon as he was able, and Gilbert, along with his sister, Amy, was left behind to take care of their mother who is son large she oozes over the edges of her recliner, their special needs brother whom Gilbert calls “The Retard,” and their hormone-raging sister, Ellen. Gilbert works a the downtown, family owned supermarket that is now empty due to the opening of the new superstore, Food Town.

The novel is both hilarious and sad. Gilbert is a fascinating character. He is a paradox of stunted development and a mature sense of responsibility: he’s a 24-year old man who, when it comes to women and the words he chooses, seems more like a 15-year-old boy.

Yet, when it comes to his family, he is the one of the remaining seven who holds them all together. He calls his brother “The Retard,” yet Gilbert is the one who loves his brother hardest, who takes care of him, whose heart is softest for him. Gilbert contains both profound love and deep, angry resentment.

The characters in and scenes in Hedge’s book are vivid, funny, and refreshing in their originality. I couldn’t help but laugh at the ridiculousness of many passages. At the same time, it was tender, and poignant. My heart goes out to Gilbert Grape.

Jasmine is a Hindi woman, widowed in India, where grief-stricken, she continues to America as she had planned to do with her husband before his murder.

The book begins in Iowa, where the exiled Jasmine lives with Bud, the Iowan banker who holds the loans for all of their farmer neighbors, who struggle to make a living with their family farms.

But this isn’t Jasmine’s first life — the exotic Indian whose traditional cooking sneaks its way into local lives. Though young, Jasmine has been Jyoto, Jasmene, Jase, and Jane, a widow, a victim, a killer, a caregiver, and a lover by the time she arrives in Iowa.

The book is anchored in Iowa with flashbacks to India; the oceanic crossing and arrival to America; and New York. Each setting is distinctive, and Iowa is distinguished by its farming community, which, like in A Thousand Acres, on the surface seems quiet and safe.

The fascinating part of this book was the juxtaposition of Jasmine’s history of open violence with the danger that lies in quiet places, too. The quiet danger of an Iowa farming community is subtle, and stealthy, because you think you’re safe. You’re not expecting it.

In the end, what I loved about Jasmine is that it makes very clear that the hidden dangers in a quiet, safe Iowa farm town are just as brutal as the dangers we expect from what we consider to be turbulent, unsafe communities. It is a fascinating story of becoming an American.

More than two years ago, I first learned of Marilynne Robinson’s Gilead, set in Iowa, and heard people rave about it. “One of the best books I ever read!” “OMG you have to read it.” “You’re going to LOVE it!” 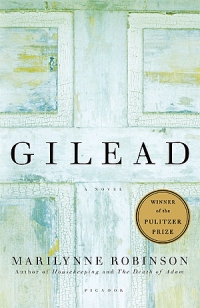 When I started my project, to read 3 books set in each US state, I thought, Oh goodie! I can read this one when I get to Iowa. When I hit the “I” states — Idaho, Illionois, Indiana — I started getting excited. I was almost there.

A couple of weeks ago, I finished my final Indiana read. The moment I closed the book, I picked up my Nook and purchased Gilead.

I started reading. I puzzled. I kept reading.

For me, they never came. The narrative — letters from an aged, ill pastor to his small son — did not engage me. The spiritual questions did not interest me. There were a couple of lovely passages, like this one, but overall, it was a huge letdown.

Often, a hyped book works out for me. The Goldfinch for example, or The Woman Upstairs. I loved those. I devoured them. They were massively exclaimed over: I expected 5 star reads from those, and they delivered. With this one, though, I expected 5 stars and ended up with 2. Maybe I would have given it 3 had I had no expectations.

The good news is that Iowa presented me with four books I really wanted to read, and I wasn’t sure how I was going to pick only three. Gilead eliminated itself and made that choice for me.

Now I’m onto the next Iowa book I was excited about. I’m trying to temper my enthusiasm so as to not fall into the same trap as with poor Gilead. It was on a pedestal and had a long way to fall.

My excitement this time is based on something much more superficial, though. It’s not based on the hype of professional readers, book bloggers, or literary critics. It is based solely on the cover: it has a hay bale on it!

There’s a shimmer on a child’s hair, in the sunlight. There are rainbow colors in it, tiny, soft beams of just the same colors you can see in the dew sometimes.

Andrea Badgley is a mom, wife, and creative nonfiction writer at Butterfly Mind. She grew up on the coast of Georgia and now lives with her husband and two children in the Appalachian mountains of Virginia.